Join us for the 7th Annual Gerry Johnston Memorial Tournament in support of those living with ALS. We will be teeing off at Kedron Dells on August 29, 2019 for another fun-filled round of golf. The tournament will be bigger and better than ever thanks to the increased support from our community. We would like to thank everybody for their support and hope that this year's event will continue to bring awareness to this disease and the need to support families of ALS patients.


The tournament last year was more successful than we could have imagined and we are planning on another great event this year. In the first 6 years, the tournament raised over $140,000 to support those living with ALS. Funds raised went to ALS Canada and the word-class ALS Clinic at Sunnybrook Hospital. 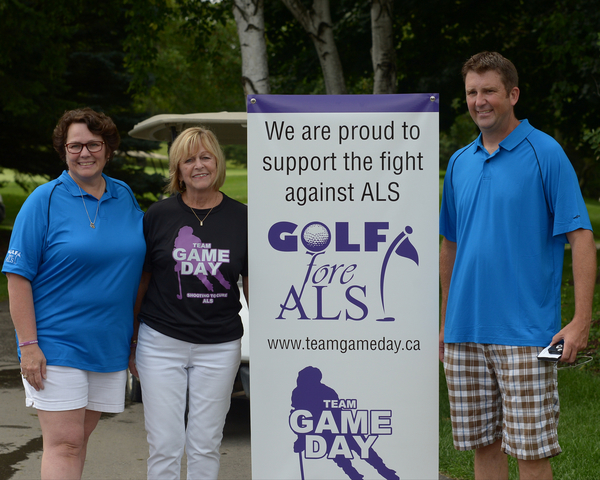 In Memory of Gerry Johnston


Gerry was a successful businessman and was a member of numerous charitable organizations. He was a Shriner, a Rotarian, a tireless volunteer for the Bowmanville Hospital Foundation, Big Brothers / Big Sisters, Oshawa Minor Hockey, Special Olympics, United Way, Setting the Pace for the Oshawa Cancer Centre, Oshawa Sports Hall of Fame... just to name a few. This, along with Gerry's strong business sense earned him the first "Business Person of Year Award" from the Oshawa Chamber of Commerce.


In February 2013, after 7 months of living with undiagnosed symptoms, Gerry was diagnosed with ALS (also known as Lou Gehrig's Disease). Over the course of the following year, the disease slowly took away the strength of every muscle in his body but left him with 2 things; his mind and his heart. Using these, he fought against this disease with great dignity and courage. This disease changed his life but did not define him. He still wanted to give back to the community from which he was rewarded for so many years. More than ever, he was dedicated to "Making Moments Matter".


Gerry lost his battle with ALS in February 2014, only 1 year after being diagnosed. We hope to honour his legacy and the huge footprint he left in this community each year with Golf Fore ALS - Gerry Johnston Memorial Golf Tournament.

To see more photos of past events, click here.


This year, I am supporting a cause that I have never supported before. I'm supporting a cause that only a year ago, I knew very little about. I, along with my family, and friends have decided to put our efforts together to fight ALS. ALS (also known as Lou Gehrig's Disease) is a progressive neuromuscular disease in which nerve cells die and leave voluntary muscles paralyzed. There are currently 2,500 to 3,000 Canadians living with ALS. Every day, 2 to 3 Canadians die from this disease. The cause of ALS in unknown and there is no cure.


Last summer, I began to notice some changes in my speech. It came and went, but it got more frequent and it progressively got worse. I found it difficult to talk and difficult to eat. In February, after months of tests, the unthinkable happened. I was diagnosed with ALS.


Since my diagnosis, my family has participated in a number of events in support of ALS. We have found that there is not enough awareness about this disease and not nearly enough funding. We are hoping to change that. We want to create awareness and hopefully some day find a cure. We are motivated by the fact that the Canadian medical community is leading the way in international research and are getting closer to finding a cure.


I have been active in our community for many years and I've always made sure that I gave back to the community from which I was rewarded. Over the years, I have helped organize charitable events, fundraisers, golf tournaments, or anything else to support a cause.


I would like to personally invite you to attend our “Golf Fore ALS” golf tournament on August 21, 2013 at Kedron Dells Golf Club in Oshawa. Proceeds from this tournament are going to ALS Canada and to the ALS Clinic at Sunnybrook. ALS Canada provides support as well as providing equipment and devices to those affected by ALS .


Join us for a great day of golf and learn what "Making Moments Matter" really means,